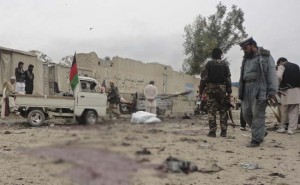 A suicide bomber reportedly blew himself up in the middle of a demonstration against corruption in Afghanistan’s eastern province of Khost on Thursday, thereby killing 17 people and injuring at least 50 others, government officials said. Reuters report:

Footage of the attack showed the explosion struck close to provincial officials, including one of the lawmakers who had helped organize the protest. There was no immediate claim of responsibility and it was unclear whether the attack was linked to the insurgency led by the Afghan Taliban.

In a separate attack in southern Helmand province, a district police chief was killed by a roadside bomb close to an outpost seized by Islamist Taliban insurgents, the deputy governor said. Violence escalated in Afghanistan as most foreign troops withdrew in 2014 and last year was the worst on record, with more than 10,000 civilian casualties, the United Nations says.

While bombings are frequent across the country, the attack in Khost was unusually deadly as it occurred in a crowded area. “The protest against corruption had been going on for days,” said Khost police chief Faizullah Ghairat. “Today a suicide bomber blew himself up among the protesters.”