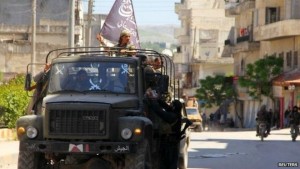 Islamist rebels in Syria have taken over the key north-western town of Jisr al-Shughur, activists say. It was the last major town under government control in Idlib province. Correspondents say it may give rebels a route to the ruling elite’s heartland. BBC reports:

The Islamist forces, including the al-Qaeda-affiliated al-Nusra Front, began the assault on Thursday. State media said the army had redeployed outside the town “to avoid civilian casualties”. They quoted a military official as saying that, before withdrawing, troops had engaged in fierce fighting with “armed terrorist groups” who arrived in large numbers from the Turkish border.

Activists from the London-based Syrian Observatory for Human Rights said government forces had fled. The bodies of at least 60 pro-government fighters were lying in the streets, the observatory added.  Before the rise of Islamic State, the Nusra Front was seen as the strongest and most militant rebel force. The city of Idlib was overrun by the rebel groups last month.

Since then, government forces have been trying to protect their supply route between Aleppo and Hama province on one side and Latakia on the other. Latakia is home to the core of the Alawite minority to which the family of Syrian President Bashar al-Assad belongs and is so far largely untouched by the war.