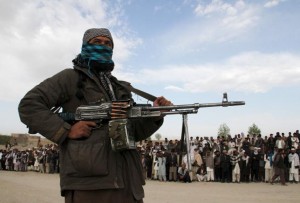 The Afghan Taliban announced on Wednesday the start of its annual spring offensive, warning it would ramp up attacks on foreign embassies and government officials, as well as military targets, starting on Friday. Reuters have more:

The Islamist militant group has been fighting the Afghan government and its foreign backers since it was ousted from power by U.S.-backed Afghan forces in 2001.

“If the foreign occupiers really want to relieve themselves from this nuisance of fighting, they should immediately withdraw,” the Taliban said in a statement. The Taliban typically steps up its military efforts when warmer weather facilitates the transit of fighters and weapons.

This year’s offensive has been dubbed “Azm” or “Resolution”, similar to the name chosen for the NATO-led coalition’s two year “Resolute Support” mission that started in January. An Afghan defense ministry spokesman dismissed the Taliban announcement, saying the armed forces were ready to battle any insurgent offensive.

“Our enemies don’t have the capability to collapse any province or district,” said Brigadier General Dawlat Waziri.