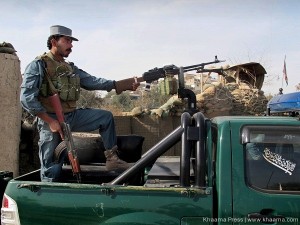 Taliban militants attacked a police station in southern Afghanistan, killing three officers, and abducted 19 people working for a land mine clearance project in the country’s east, officials said on Monday. Reuters was there:

The attack took place in Lashkar Gah, the provincial capital. Afghanistan’s armed forces launched a major offensive against Taliban insurgents in Helmand this spring. The kidnap of the de-miners in the eastern province of Paktia was the latest in a series and came days after four abducted ethnic Hazara men were killed by their captors.

Abdul Wali Sahi, deputy governor of Paktia, said the Taliban abducted the de-miners on Sunday while they were surveying an area on the outskirts of Gardez, the provincial capital. The abducted de-miners were employees of Sterling Demining Afghanistan, Sahi said. The company holds mine-clearing contracts throughout Afghanistan.