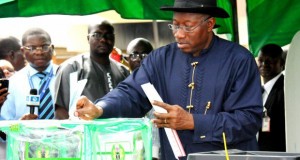 The Transformation Ambassadors of Nigeria (TAN) says it has no regrets over its role in mobilizing for the candidate of People’s Democratic Party (PDP), in last week’s presidential election.

National Coordinator of TAN, Dr. Ifeanyi Ubah, who spoke in Abuja yesterday, said President Goodluck Jonathan meant well for the country, hence the numerous achievements he recorded in different sectors of the economy, including the road sector which he argued has improved from what it used to be in the past.

“We want to urge all politicians to follow the exemplary steps taken by President Jonathan who willingly conceded defeat and congratulated the President-elect,” said Ubah.

“What he has done has saved this country a lot of stress and I dare say that it also shows that democracy has come to stay in Nigeria.

“We supported a very nice man, a gentleman, a statesman and he has not failed us because by his act Nigerians can now know that he meant his words when he said that nobody should die because of his ambition.”

Speaking further, he noted that Nigerians would in the near future begin to judge, rate and put him in the proper position.

Ubah also congratulated the President-elect, General Muhammadu Buhari (retd) for his consistency and resilience. He said TAN expects the new administration to try and deliver on its electoral promises.

“We wish to congratulate the President-Elect, Gen. Mohammadu Buhari (retd) for his consistency, persistence, doggedness and resilience since 2003 in his quest for the presidency of Nigeria.

“This shows that persistence on a mission yields success in the end. His courage will make a good case study in universities all over the world.

“We urge Nigerians, irrespective of their religious, ethnic and political affiliations, to respect the outcome of the election in the interest of peace, progress, unity and development of our country.

“Nigeria as a country is greater than any individual or group and it is our plea that no one should do anything to destabilize the unity, peace, order and good governance of Nigeria, which we constantly advocate and support at all times,” Ubah said.