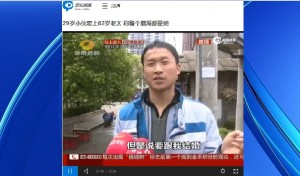 However, his happy life turned upside down when the woman suddenly disappeared from his life without a trace.
She did not tell him that she was breaking up with him. Devastated over the loss of the love of his life, Jing quit his job and went to the woman’s hometown in Xiangtan, Hunan.

He managed to locate her family, but they did not welcome his arrival. The woman’s son-in-law threw him out of his home and refused to speak about his relationship with his mother-in-law.  Jing tried another tactic. He contacted the woman’s former husband and asked if he knew her whereabouts.

The former husband responded by showing Jing his divorce certificate and told him to leave him alone.  However, Jing refuses to give up. He turned to the local media for help. He told reporters that the woman previously said that she will marry him and that he does not want to give it up until he finds her.