Thug Life: Tania Omotayo Dressed Up As A Gangster For 90’s Theme Party 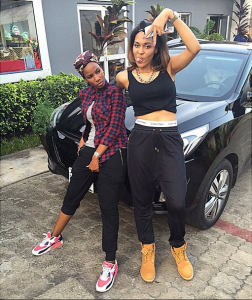 We barely see Tania Omotayo and Wizkid in photos together these days, who knows if they have split up again.

Anyways, Tania was on her groove as she rocked baggy pants and a singlet to a 90’d themed party yesterday, April 25, 2015.

There was also a video of here rapping to one of 2pac’s hit songs.

Tania is obviously feeling like a gangster in her outfit.