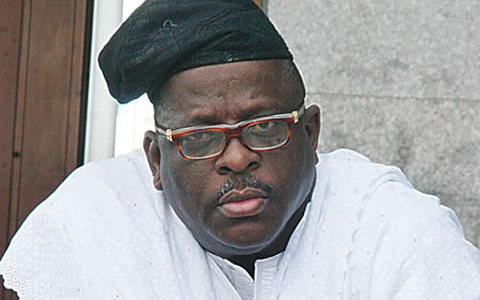 Chairman of the Organization and Mobilization Committee of Peoples Democratic Party in the South-West, Prince Buruji Kashamu, has described the National Leader of All Progressives Congress, Asiwaju Bola Tinubu, as his role model.

Kashamu, who is the Senator-elect for Ogun East Senatorial District, in a rare tribute to the former Lagos State governor in an open letter, described Tinubu as a true hero to be emulated by every Nigerian.

He said that it was important to honour those deserving of honour now that elections are over.

In the open letter addressed to Tinubu, Kashamu said, “Truth be told, men like you are made up of sterner stuff and are rare to come by in every generation. Little wonder you are called the Asiwaju and Jagaban of Borgu. I doff my hat.

“I hope that in spite of our membership of different political platforms, we would be able to collaborate for the upliftment of Yorubaland in particular and Nigeria as a whole.

“My sincere prayer is for the Almighty Allah to keep you and give you good health and long life to be able to see the Nigeria of your dream. For me, I join other Nigerians in wishing you the best, even as we aspire and pray Almighty Allah to make us – the younger ones – be like you, the Jagaban of Borgu”.

The PDP chieftain described Mr. Tinubu as the architect of modern Nigeria, who, he said, made history by leading an opposition party for 16 years and then grabbing power at the centre.

He noted that without the ex-Lagos governor, the President-elect, Gen. Muhammadu Buhari (retd.), would not have won the March 28 election.

He said, “Although I now belong to the opposition, your achievements transcend political divides and I am not ashamed to publicly acknowledge them. There is no denying the fact that your place in the history of the Yoruba race in particular, and, in Nigeria in general, is well etched.

“The fanatical support that the President-elect, General Muhammadu Buhari, enjoys in his homestead was matched with your commanding influence in the politics of the South-West and indeed the Yoruba race to produce the results we witnessed during the elections.

“By your sheer wit and unwavering commitment to democratic ethos, true federalism and economic prosperity, you led the Alliance for Democracy from a one-state party to a regional party and now a national party that is about to form the government at the centre”.

Buruji, who is currently having a running battle with former President Olusegun Obasanjo, also congratulated him and Ogun State Governor, Ibikunle Amosun.

He promised Amosun that he would ensure that the nine PDP lawmakers in the Ogun State House of Assembly give him maximum support.