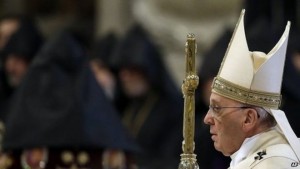 Turkey has summoned the Vatican ambassador after Pope Francis used the word “genocide” to describe mass killing of Armenians under Ottoman rule in WW1 100 years ago, reports say. BBC was there:

Armenia and many historians say up to 1.5 million people were systematically killed by Ottoman forces in 1915. Turkey has consistently denied that the killings were genocide. The Pope’s comments came at a service to honour a 10th Century mystic, attended by Armenia’s president.

The dispute has continued to sour relations between Armenia and Turkey. The Pope first used the word genocide for the killings two years ago, prompting a fierce protest from Turkey. At Sunday’s Mass in the Armenian Catholic rite at Peter’s Basilica, he said that humanity had lived through “three massive and unprecedented tragedies” in the last century.

“The first, which is widely considered ‘the first genocide of the 20th Century’, struck your own Armenian people,” he said, in a form of words used by a declaration by Pope John Paul II in 2001.