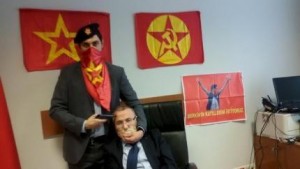 A far-left Turkish group took an Istanbul prosecutor hostage on Tuesday and then threatened to kill him, a situation prompting special forces to enter the courthouse and police to evacuate the building. Reuters has more:

The Revolutionary People’s Liberation Party-Front (DHKP-C) published a picture of the prosecutor with a gun to his head and said it would kill him at 1236 GMT (0836 EDT), three hours after gunmen stormed his office, unless its demands were met. Turkish television stations cut live broadcasts as the deadline passed, some citing a reporting ban. There was no immediate sign of any police action, according to Reuters correspondents at the scene.

The prosecutor, Mehmet Selim Kiraz, is leading an investigation into the death last March of 15-year-old Berkin Elvan, who died after nine months in a coma from a head wound sustained in anti-government protests.

The DHKP-C said on its website it wanted the police officer it blames for Elvan’s death to confess on television, the officers involved to be tried in “people’s courts”, and charges against those who attended protests for Elvan to be dropped.

In a brief video message on a widely-followed Twitter account describing itself as that of Elvan’s family, his father appeared to call on the group not to harm the prosecutor. “We want justice. We don’t want anyone to shed even a drop of blood. We don’t want other mothers to cry,” Sami Elvan said.