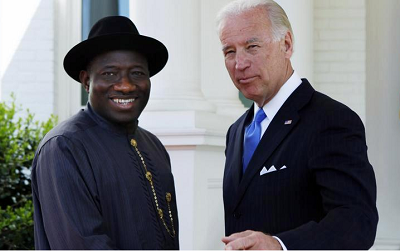 As President Goodluck Jonathan continues to receive global accolades for his disposition, which resulted in peaceful conclusion of general elections in Nigeria, U.S Vice President, Joe Biden, on Monday called to commend his leadership.

Mr. Bidden, who spoke with President Jonathan, urged him to “remain engaged and play a leadership role in global issues” as his presidency is gradually winding down in a month’s time.

A statement from the U.S Embassy in Abuja also congratulated the President-elect, Muhammadu Buhari, on his victory.

The statement reads: “Vice President Joe Biden spoke today with Nigerian President Goodluck Jonathan to commend him for his leadership in ensuring Nigeria’s recent elections were peaceful and orderly.

“The Vice President noted that President Jonathan’s actions to accept the results and congratulate President-elect Buhari, as well as his steps to date to ensure a successful transition, have strengthened Nigeria’s democracy and set a strong example for Africa and the world.

“The Vice President encouraged President Jonathan to remain engaged and play a leadership role in global issues after his presidency ends”.