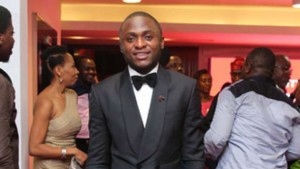 The Triple MG co-owner, Ubi Franklin who is set to wed soon is back to Nigeria after a well-deserved stay in London with his new fiancee and actress, Lilian Esoro.

They made their first public appearance together as a couple at the 2015 AY Live Show in Lagos, April 5.

Sources say they were all over each other and couldn’t keep their eyes off each other as they stopped for several interviews.

In an interview, Ubi Franklin revealed he has not taken a break from his busy schedule in four years until recently.

“I haven’t gone on vacation in four years,” he said. “And it’s my first time to travel with someone who isn’t in my work crew [includes Iyanya, Techno, Selebobo, Emma Nyra and Bassey]”, he continued.

Ubi however hinted that the rest of his ‘crew’ were on tour in the United States while he was having a private time with his bride-to-be.

He gushed about Lilian on his Instagram on April 6 writing,“Having someone that makes you happy, puts it on you, motivates you, inspires you and believes in you can really take your life to a new level.”