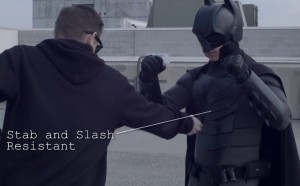 Jackson Gordon, a student of industrial design at Philadelphia University, has pooled everything he’s learned at school so far to build an awesome version of Batman’s batsuit! And we’re not talking about just another replica. This one is designed to withstand punches, kicks, stabs or baseball bat blows! OddityCentral has more:

“I’ve always been a Batman fan,” the 21-year-old from Wayne, Philadelphia told news reporters. He started making prototypes for the suit last September, using over $1,000 raised on Kickstarter. “Before making the real suit, I did at least 10 prototypes of different parts for the suit to test out materials and sewing patterns,” he revealed. “Once I was happy with those, I started making the real suit using the patterns I had decided on from the prototypes. I cut out the internal lining fabric, then added the foam padding, then a layer of kevlar, then the top grey fabric.”

While it may not look identical to the suit worn by the Dark Knight in Christopher Nolan’s latest films, they actually provide similar levels of protection. As demonstrated by Jackson himself in a series of YouTube videos, the wearer protects the wearer against almost any kind of attack, be they punches, baseball bat blows, cuts or stabs. And although it weighs around 25 pounds, the weight is distributed evenly on the whole body, so it doesn’t inhibit mobility.