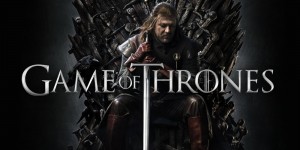 Northern Illinois University is offering a course this semester on the HBO series “Game of Thrones.” Yahoo! News reports:

The University Honors Program calls the class “Game of Thrones, Television and Medieval History” and students can take the course for honors credit, The (DeKalb) Daily Chronicle reported (http://bit.ly/1FZj88k ). The popular cable TV show, based on books by George R.R. Martin, is in its fifth season.

“It represents aspects of the Middle Ages much more realistically than other media depictions that purport to be more accurate,” co-professor Valerie Garver said. “It stands out because it comments on the human condition in a way that seems real to people. It’s a really good example of a piece of modern culture that draws on how the past impacts the present.”

The course’s syllabus includes readings and watching episodes of the show. Students also see presentations on how the show relates to modern cable technology, history and current events. NIU plans to offer the class again next spring, Garver’s co-professor Jeff Chown said. “There was tremendous demand. I think the class filled up in about an hour,” Chown said.

Junior accounting major Alex Weier said the show is deeper and more in-depth than many realize. “The themes of the show are reality-based themes, where good doesn’t always beat evil,” he said. “It keeps you on your toes.”