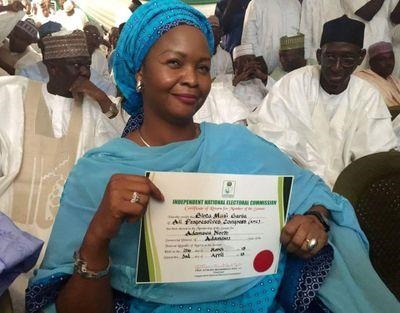 Senator-elect representing Adamawa North Senatorial District on the platform of All Progressives Congress, APC, Binta Masi Garba, said on Wednesday that she wants to make history as the first female Senate President in the country.

According to her, as the only female Senator from the North, her interest to contest for the office of the President of the Senate was to bring transparency and openness in the leadership of the red chamber.

Although the leadership of APC is yet to decide which geo-political zone in the North to zone the senate presidency slot to, the north east and north central are in pole position to clinch the number 3 position in the country.

Throwing her hat into the ring, the three term member of the House of Representatives from both Kaduna South and Michika/Madagali Federal Constituencies, told journalists in Abuja that she has written to all her colleagues and other Nigerians on the need to support her candidacy to emerge as the first female Senate President in Nigeria.

“Apart from the fact that I’ve held several positions as a lawmaker in the House of Representatives, I am the first female Chairperson of any public party in Nigeria haven been elected as the Adamawa State Chapter Chairperson of the APC in April last year. I am still holding that position till today and the unity I brought to the party brought about the successes we recorded in the recent general elections.

“As a delegate member from Adamawa State at the National Conference, I served on the committee on Political Restructuring and Forms of Government. I know what Nigerians need when it comes to lawmaking and leadership. It’s time for all to support the female folks to be at the fore front of decision making in Nigeria”, she said.