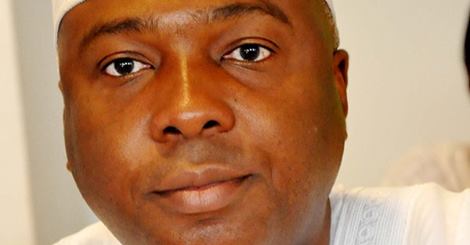 Publisher of Ovation Magazine, Chief Dele Momodu, has made a case for former Kwara State Governor, Senator Bukola Saraki, to emerge as Nigeria’s next Senate President.

He stated this on Channels Television’s Politics Today (Sunday) during a conversation on the structure of the incoming government in Nigeria and setting its agenda.

While admitting that former Benue State Governor, Senator George Akume, is another top contender for the number three position, Momodu said that Saraki is a much younger and vibrant politician, who hails from one of the All Progressives Congress’ strongest holds, Kwara State.

The national leadership of APC has reportedly zoned the Senate Presidency to the North-Central, with Saraki and Akume, who both hail from the geo-political zone, leading contenders for the plum position.

Presenting his arguments for the Senate Committee Chairman on Environment and Ecology, Momodu said “Saraki appeals to a lot of us younger folks because the next Senate is going to have maybe about 20 or more governors who are Senators. So we need a man who understands them very well.

“Nigeria has gone through so much in the past. So we need men who can hit the ground running. Not just politicians but people with extensive global networks and I think Saraki has that”.

The former presidential candidate of the NCP, however, added that the incumbent Senate President, David Mark, should not be ruled out of contention as he might be interested in retaining his position.

He, however, expressed doubts that the APC would allow that when they have a majority in the Senate.

The renowned publisher also shared his views on the outlook for leadership of the House of Representatives.

“One name you cannot ignore today is Femi Gbajabiamila. Femi made his name in the House of Reps for being very vocal (and) very powerful. He rises up to the occasion, he does not shy away from doing what is expected of him as a legislator”, he said.

Momodu noted that he had written an article published in the dailies in which he stated his expectations and named persons he felt would be right to be in the cabinet of the incoming administration of Gen. Muhammadu Buhari (retd.).

According to him, there are major ministerial positions he also expects the new government to take seriously.

“APC, I believe is blessed with a lot of very great minds. Of course Governor Babatunde Raji Fashola of Lagos State will be available to serve that government because his tenure as Governor will be expiring on May 29.

“I don’t see how anybody is going to ignore such a man”, he said.

The publisher also advised Mr. Buhari to “look beyond APC” and pick Nigerians from any part of the world who have distinguished themselves.

“We need men of accomplishment, we need women of solid characters”, he said, adding that former Cross River State Governor, Donald Duke, is one of such persons.

He also said that all geopolitical zones in the country must be represented in the new cabinet, “whether they voted for you or not”.