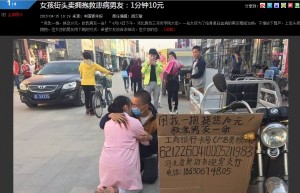 A woman in China, took to the streets to offer men hugs for money.  She took the desperate measures to cover a medical bill for her boyfriend’s surgery.  Odd News Blog has more:

Internet users across the country were touched by the woman’s love and devotion to her boyfriend after photos were uploaded to the Internet, showing the woman offering hugs for money.  The young woman who was identified as Yuanyuan, appeared on the streets of Sanhe, Hebei. She had a sign, which stated that she offered a hug for 10 yuan (about $1.50) to pay for medical bills.

Yuanyuan said that her boyfriend, Jia, needs a bone marrow transplant, and was asked for 250,000 yuan (about $40,000) as deposit. Unable to pay the fee, Yuanyuan came up with a way to make money and get donations, by offering hugs to strangers.

When Jia heard what Yuanyuan was doing for him on the streets, he went to see her and asked her to stop. Witnesses said that the two got into a heated argument on the street before both broke down, cried and hugged each other.