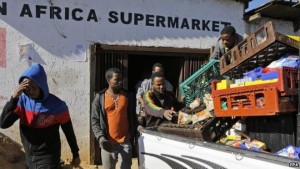 Foreign-owned shops in South Africa have been attacked and looted overnight in eastern Johannesburg, the latest in a series of xenophobic attacks.

Police fired tear gas and rubber bullets to disperse the looters, while about 200 foreign nationals reportedly took refuge at a police station. The attack came hours after thousands took part in a rally against xenophobia in the coastal city of Durban.

Anti-foreigner violence in recent weeks has killed at least five people. Many jobless South Africans accuse foreigners of taking jobs in a country where the unemployment rate is 24%. A crowd began looting foreign-owned shops in east Johannesburg on Thursday night, and a car, and a building believed to house foreigners, were set on fire.

The acting Premier of the Gauteng province around Johannesburg, Qedani Mahlangu, condemned the violence. “We have to, each and every South African who’s a peace-loving South African, to stand up and condemn this,” she told the BBC. “Today we can’t… say that we want to live in isolation when the whole world is globalising.”