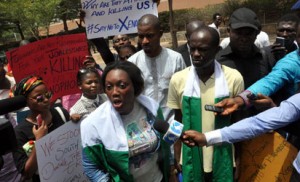 If our people can’t live and work there, their businesses should also not operate here. That was the message of the angry Nigerians that stormed the South African High Commission in Abuja, yesterday, threatening to shut down South African companies in Nigeria as xenophobic attacks continue in South Africa.

The Nigerian Consul-General in South Africa, Ambassador Uche Ajulu-Okeke had said that the loss by Nigerians in the attacks included looted shops, burnt shops, two burnt mechanic shops, 11 burnt cars and two stolen cars among others.

Reacting to the attacks, angry Nigerians protested in Abuja and Benin City.

Nigerian youths under the aegis of Nigerians Demand, took to the streets of Abuja and cordoned the entrance leading to the South African High Commission in Wuse District, protesting the unwarranted attacks and killings in South Africa.

Apart from the High Commission, the protesters who were accompanied by a team of security personnel also stormed the Ministry of Foreign Affairs and DSTV offices at Maitama, requesting that justice be done to victims of the attacks.

Addressing the crowd, co-ordinator of the group, Mr. Deji Adeyanju, expressed disappointment over the attacks and the lackadaisical manner it is being handled by the South African Government.

“Never in history have we attacked South African businesses. We don’t see reason to do competition with South Africa. We don’t know where the hate is coming from.

“We have seen shops being looted, we have also discovered that those who are looting the shops have police protection and they are happy that foreigners are leaving South Africa.

“We have spoken with some of our friends and they have told us that they have seen a situation where South Africans are happy and excited that they are leaving. For us, this calls for serious concern because South African corporations and multi-nationals are here, doing their business and thriving very well.

“We see that this is very sad because Nigerians in social media are already urging us to retaliate, but we don’t want this idea because we do not want South Africans to be attacked or killed in Nigeria but we want a situation where the South African government will take action. Let them take a definite action, do sensitization programme for their people. Let them reach out to the traditional rulers in South Africa because this crisis was caused by a traditional ruler.

“We want a situation where the South African government takes adequate action. We are not leaving here until we speak to the High Commissioner. We are here for a very peaceful protest, we will not cause any trouble but we do not want Nigerians to take the laws into their hands. We have asked them not to attack South Africans or their businesses.

“All we want to show is for South Africans to know that Nigerians are very unhappy over what is happening. We also want to use this opportunity to tell the Nigerian government to do more, so that they can be on top of the situation because South Africans have become enemies to African people,” Adeyanju said.

Another leader of the group, Tolu Ebun, also said: “Enough is enough. We are giving the South African government 24-hour ultimatum to halt the attacks on foreigners.

“The police in South Africa and the government are not doing enough. We have pictures where the police would stand and look as their people attack foreigners, loot their shops with smiles on their faces; this is sad. Look at Nigerian police protecting the South African High Commission, this is what we should get. This is what South African police should do; not stand by and watch the citizens kill other citizens. This is not good, this is sad, barbaric and we are not part of it.

“We are giving South Africa 24 hours to speak to us. We are angry, South Africans are our friends living in Abuja, living in Lagos and all over Nigeria. There are South African businesses established in Nigeria and we have not brought down any, we have not attacked them in anyway, we stood by them. Why are they attacking us? Is this what Nelson Mandela stood for? Is this what the Madiba died for?”