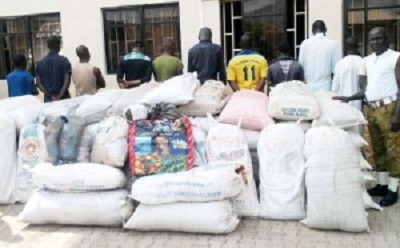 The National Drug Law Enforcement Agency (NDLEA) says no fewer than 20 suspected drug traffickers were prevented from exporting drugs to countries with capital punishment for drugs since January 2014.

This is contained in a statement by the agency’s Head, Public Affairs, Ofoyeju Mitchell, on Thursday in Lagos.

It said that out of the number, 19 were Nigerians and a Ghanaian.

“Their final destinations are Malaysia, China and Thailand where drug trafficking is punishable by death.

“NDLEA boss while commiserating with the families of the executed drug convicts urged stakeholders to intensify anti-drug abuse campaign efforts.

“I sincerely sympathise with the families of the executed drug convicts.

“This is a moment of sober reflection on the illicit activities of drug trafficking syndicates.

“This brings to the fore the bigger picture of those in foreign prisons, those arrested here and others preparing to smuggle drugs.

“It is a wakeup call for stakeholders to step up their counter-narcotics efforts.

“Apart from drug trafficking being a criminal act, narcotic smuggling poses a serious threat to public health and safety.

“While many people are rendered comatose from drug abuse, other top celebrities had died prematurely on account of drug addiction”, it quoted the NDLEA boss, Mr Ahmadu Giade, as saying.

According to the statement, Giade urged individuals, families, groups and institutions to take responsibility in preventing illicit drug production, trafficking and abuse.

“The NDLEA has one of the highest criminal convictions in the country. In 2014, we won the conviction of 2,054 drug offenders.

“As we work very hard to reduce cases of illicit drug trafficking.

“It is imperative for individuals and groups to take steps aimed at preventing their loved ones from getting involved in drug abuse and trafficking”, it advised.

The agency said that a total of 106,914kg of various narcotic drugs was seized from the 20 drug suspects.

“The only Ghanaian among the suspects was going to Bangkok, Thailand, with 450 grammes of cocaine he had ingested”, it said.

The agency also said that three females were among those apprehended.

It identified one of the ladies as a professional dancer caught with 3.450kg of amphetamine hidden in a pair of Jeans trousers while attempting to board a flight to Malaysia.