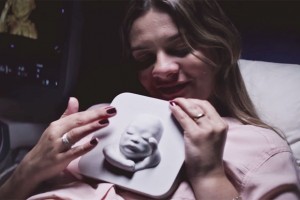 A Brazilian mother who lost her sight at the age of 17 was able to “see” the face of her unborn son with a 3-D printing of an ultrasound image. UPI reports:

Tatiana Guerra, 30, who has named her son Murilo, starred in a short film by Huggies Brazil that showed the woman becomingone of the first blind mothers to be able to “see” her unborn child with the use of a 3-D printed ultrasound image.

The video was created by ad agency Mood with help from 3-D printing firm The Goodfellas.

“As a brand, Huggies considers each moment of this new phase in the lives of many women — the maternal role,” said Priya Patel, director of baby care at Kimberly-Clark Brazil, Huggies Brazil’s parent company. “Huggies believes that such protective embrace and bond help babies grow up happy.”