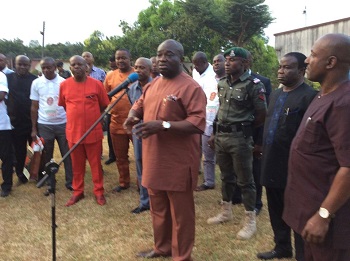 The Governor-elect of Abia State, Dr. Okezie Ikpeazu, has suspended temporarily, any form of courtesy calls by his supporters so as to enable him plan adequately for the task ahead.

Ikpeazu, in a press statement personally signed by him, thanked Abians for voting him as their governor but pleaded with those falling over themselves to pay him congratulatory visits to give him some breathing space so he could prepare for the job he was elected to do.

The statement read in part, “I wish to thank all those who have felicitated with me in one way or the other since I was declared winner but plead for the understanding of all those who are planning courtesy calls that I shall no longer be available to receive any delegation coming with the intention to congratulate me.

“Because of the enormity of the task ahead, I require all the time I can get to plan to ensure that I justify the enormous confidence you have all reposed in me”.

It was learnt that since he was announced winner of the governorship election, Ikpeazu’s country home at Umuobiakwa in Obingwa, has become a Mecca of sorts as individuals and groups continue to pay congratulatory visits to him.

Various entertainment groups and dancing troupes were also on hand to provide entertainment with free feeding a daily routine for all visitors at the governor-elect’s residence.