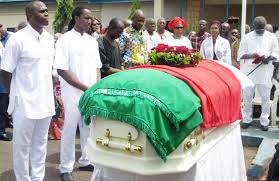 The Abia State Government was on Friday conspicuously absent at the burial ceremony of the late Senator representing Abia North, Uche Chukwumerije at his Isuochi country home in Umunneochi Local Government Area of the state.

While Governors Willie Obiano and Rochas Okorocha were among dignitaries that attended the event, the Abia State Government was not represented by any official.

When contacted on why the state was not represented at the late Senator’s burial, which was attended by people from all walks of life, Special Adviser to Governor Theodore Orji on Political Matters, Chief Ama Abraham, accused Chukwumerije’s sons of failing to carry the state along in the burial arrangements.

He said, “The family refused to carry the state along, which is a serious indictment. Chukwumerije was at the Senate twice and the state government gave him all the support he needed”, wondering why his family members would decide to sideline the state during his burial.