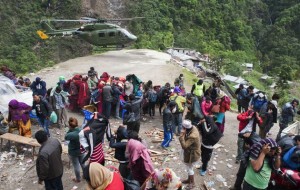 Local volunteers  as well as Nepali police found the bodies of about 100 trekkers and villagers buried in an avalanche set off by last month’s devastating earthquake and were digging through snow and ice for signs of dozens more missing, officials said on Monday. Reuters report

The bodies were recovered on Saturday and Sunday at the Langtang village, 60 kilometers(40 miles) north of Kathmandu, which is on a trekking route popular with Westerners. The entire village, which includes 55 guesthouses for trekkers, was wiped out by the avalanche, officials said.

Gautam Rimal, assistant chief district officer in the area where Langtang is located.