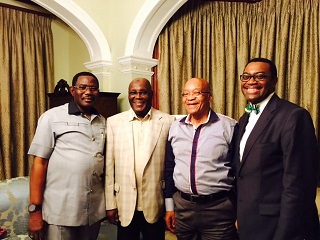 Former Vice President Atiku Abubakar over the weekend commenced lobby for the candidacy of Nigeria’s Minister of Agriculture, Akinwumi Adesina as President of the African Development Bank (AfDB).

A statement issued by the Atiku Media Office in Abuja said that Atiku Abubakar’s shuttle diplomacy to shore up the much-needed support for the Nigerian candidate follows a mandate from President-elect Muhammadu Buhari to the former Vice President to leverage on his contacts to lobby for the emergence of Mr. Adesina.

President-elect Buhari, who backs the candidacy of Mr. Adesina, had last month conveyed his support to the President of Ghana, John Mahama, when the two leaders met in Abuja.

According to the statement, Atiku travelled with Mr. Adesina to South Africa over the weekend where the two met with President Zuma at the Presidential Residence in Durban.

“His Excellency former Vice President Atiku Abubakar met President Zuma in the company of Dr Akinwumi Adesina during which the directive of President-elect General Muhammadu Buhari was conveyed to Zuma”, the statement said. “The issue of South Africa and the Southern African region support for Nigeria’s candidate was exhaustively discussed and well appreciated”.