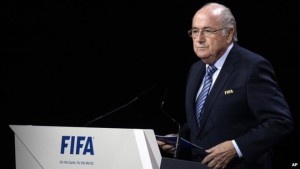 The 209 members of Fifa are to vote for their new president at a congress in Zurich, as football’s world governing body faces a major corruption scandal. Sepp Blatter, the favourite, is seeking a fifth term. He is being challenged by Prince Ali bin al-Hussein of Jordan. BBC has more:

The vote comes two days after seven top officials were held in Zurich in a US fraud inquiry that indicted 14 people. Opening the second day of the congress, Mr Blatter told delegates Fifa faced “troubled times”. Mr Blatter has been called on to quit but has already made clear he is not responsible for the scandal and wants to combat corruption.

“Events have thrown a shadow across Fifa and congress. Let’s try to lift that shadow,” he said. “Let’s show to the world that we are able to run this institution that is Fifa, that we can do that together.” Proceedings were briefly disrupted by two Palestinian demonstrators calling for Israel to be excluded from Fifa. They were ejected from the hall. Mr Blatter, 79, and Prince Ali, 39, will each have 15 minutes to address the delegates.

The 209 member football associations then vote individually in the ballot, which is secret. In the first round, a candidate must get 140 votes – two-thirds – to win outright. If that is not achieved, there will be a second round requiring a simple majority – whoever gets the most votes.