Home Metro News Anyone Who Believes I Made Disparaging Comments Against Igbos Is A Moron...
Facebook
Twitter
WhatsApp 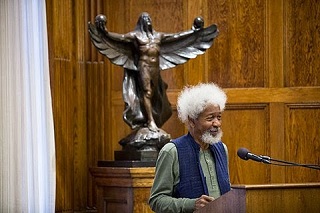 Nobel Laureate, Prof. Wole Soyinka, has denied describing Igbos as people who vote based on their stomach and suffer from incurable money mindedness.

He was quoted to have said: “Igbo remained unrepentant and resolute towards their strategic objective of secession at worst; or a Nigerian president of Igbo extraction at best”.

The report went viral and resulted in unbridled verbal attacks against Soyinka, with some describing his statement as evidence of senility.

However, in a statement on Thursday, Soyinka said that it was unfortunate that people could tell lies against him.

The renowned playwright described those peddling the rumour as morons with ulterior motives.

Prof. Soyinka pointed out that his entire lecture delivered at Harvard University was recorded on video and anyone who was interested could access it on the Internet.

He said, “I have just read a statement attributed to me on a news outlet, evidently one of the Internet infestations. My lecture at the Hutchins Centre, Harvard University, was video recorded. Anyone who believes what I am alleged to have said must be a moron – repeat, a moron.

“It is demeaning, sickening and boring to have to deal with these cowards who cannot fight their own battles but must fasten their imbecilic pronouncements on others. Only the mentally retarded will credit this comment attributed to me regarding the Ndigbo voting pattern in the last elections.

“I strongly suspect the author of this despicable concoction, and may make a further statement, once the source is verified”.