With just about three weeks remaining for him to be sworn in as Nigeria’s president, Muhammadu Buhari has started putting his cabinet together.

In view of this, the president-elect has reportedly directed governors elected on the platform of the All Progressives Congress (APC) to forward three names each of their ministerial nominees.

Vanguard learnt that while giving the directive, Buhari said only those who are technically competent and of proven integrity, as well as loyal to the party could be elected.

Buhari, it was learnt, told the governors that once they sent three names each, he reserved the right to choose anyone he thinks was best from the submitted names.

The incoming president, who has often lamented the cost of governance is expected to cut the number of ministerial nominees to the barest minimum, with the slots for ministers of state set to be scrapped. Nigeria have 42 Cabinet ministers, an unnecessarily bloated cabinet, when compared with America’s 15.

However, a source told Vanguard that the staus quo may well remain if Buhari bows to pressure. The incoming president, according to the source, is being pressured by the APC to accommodate ministers of state to “at least compensate women in the party. Left to Buhari, he wouldn’t have more than 20 ministers but there is a lot of pressure on him to use it to compensate the women”.

Aside pressure from his party, the constitution mandated that political parties and cabinet positions reflect the “federal character” of the nation. As such, political parties were required to be registered in at least two-thirds of the states, and each state was required to produce at least one cabinet member. Buhari is therefore expected to have at least 36 ministers.

Meanwhile, APC governors would be meeting with the president-elect today to congratulate him on his imminent assumption of power. At the meeting, issues relating to the party’s interests are expected to be discussed, especially that of zoning of National Assembly leadership slots like Senate President and Speaker of the House of Representatives among others.

The United States run effectively with 15 cabinet ministers after dividing the portfolios this way: 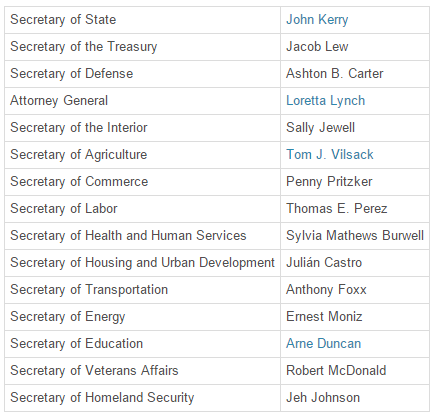