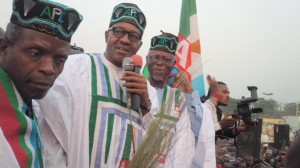 Jigawa State Governor, Alhaji Sule Lamido, has warned president-elect, Muhammadu Buhari and the leadership of the All Progressives Congress (APC) to ensure that they deliver on their electoral promises as no excuses will be tolerated by Nigerians.

The governor said this at the inauguration of the Shiroro bridge in Niger State, reminding the APC that no conditions about whether the economy was favourable or not were given during electioneering.

“They tried to break and distort Nigeria’s harmony, they tried to turn tribe against tribe, brother against brother, raising false hope. They must fulfil all their promises because there was no condition of good or favourable economy when they were making these promises,” said Lamido.

“During campaigns, APC were busy blackmailing the PDP; they did not raise any developmental issue; they were busy harping on the dysfunctionalities of the nation, which included Boko Haram, corruption and other security issues. They never knew a day of reckoning will come. Now, they have to fulfill all those promises they made,” Lamido stated.

“Leadership and governance have lost meaning because it does not give rights, it only confers privileges. Any nation that denies people their rights is a nation waiting to explode. Governance is a responsibility,” Lamido explained.