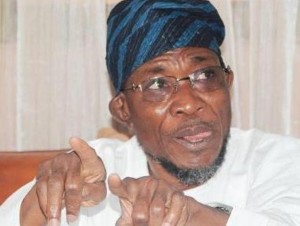 Osun State Branch of the Nigerian Medical Association (NMA) on Friday wrote an open letter to the state governor, Rauf Aregbesola, over unpaid six months salaries, as well as other welfare packages for its members and other workers in the state.

The association, in the letter signed by the chairman and secretary of its Action Committee, Dr R.A Adebayo and Dr Adeola Ajibare, stated that medical doctors and other workers in the state had suffered for months of unpaid salaries.

The state branch of the NMA expressed regret that governor had chosen to make himself unavailable for dialogue despite the efforts made by the association to broker peace over the matter. Two previous letters dated 2nd April and 24th April, 2015 to the governor were also yet to yield any positive result.

While the state governor had often blamed its inability to pay workers on the federal government, the group said it discovered recently that Osun State had received monthly revenue from the Federation Account up till March, 2015, although there was a general reduction occasioned by the dwindling fortune of the national economy.

Instead of paying workers salaries, NMA noted that the governor had chosen to disburse the money to political office holders and contractors.

“Despite the non-payment of six months salaries to doctors and other civil servants in Osun State, contractors and political office holders have been the beneficiaries of the available revenue that accrued to our state from the federation account.”

NMA therefore wondered what kind of government leaves its workers to go hungry while it pays politicians and contractors. It described the government’s action as ‘misplaced priorities in resource allocation and distribution’.

“This situation has adversely affected the welfare and well-being of not only members but the entire citizenry of Osun State,” the NMA said.