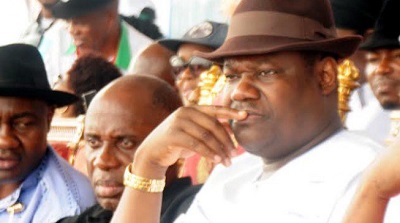 The All Progressives Congress, Rivers State chapter, has labeled the state deputy governor, Tele Ikuru, the “modern Judas”, who is willing to sell his master for material gain.

The Rivers APC chairman, Dr. Davies Ikanya, who made this known in a statement on Sunday, decried the unprovoked attack on Governor Chibuike Amaechi, who he said “picked him (Ikuru) from the gutter and made him whom he has become politically”.

Mr. Ikuru, who is the Chairman of the Transition Committee, set up by Rivers State governor-elect, Nyesome Wike, addressed a press conference in Port Harcourt last week during which he took the governor, who he worked with as deputy in the last seven years, to the cleaners.

The deputy governor had defected alongside his boss to the APC but some few days before the presidential election, he retraced his steps back to the Peoples Democratic Party, PDP.

The APC said it was shocked to read about how Mr. Ikuru rained abuses on Mr. Amaechi, describing it as “irresponsible”.

“It is sad that after serving as Amaechi’s Deputy for over seven years, Ikuru, who several times in the past described Gov. Amaechi as the Hero of Rivers Politics and the best political exponent from the State, is suddenly singing a different tune. This is the height of ingratitude and paints Ikuru in his true colours as a Judas who is ever ready to sell his master for mundane gain”, the APC said.

Mr. Ikanya described the deputy governor’s attack on his boss as unwarranted, saying: “Amaechi’s love for Ikuru is legendary. He chose him as his deputy despite Ikuru having teamed up with Sir Celestine Omehia and others to frustrate Amaechi’s governorship ambition during the ill-fated PDP Primaries of 2007.

“With God’s intervention the Supreme Court in its wisdom revalidated Amaechi’s mandate as the authentic PDP guber candidate, thus making him the Governor”.

The APC also said in 2011 against the counsel of many well-meaning Rivers people, Mr. Amaechi again chose Ikuru as his running mate as he successfully sought re-election.

The party said it is also instructive to note that Mr. Amaechi has refrained from either speaking ill of his deputy or moved for his removal despite the latter’s defection.

It stated, “For Ikuru to now have the effrontery to describe his benefactor, a fellow who loves him with all his heart and who on various occasions left the running of Rivers State in his care, as a disgraceful leader does not only show him as an ingrate of the highest order but also indicates that Engr. Ikuru may need to subject himself to psychiatric tests”.

The party said while it is understandable for Mr. Ikuru to be tempted to engage in excesses in view of the governor-elect’s alleged promise to appoint him as the Secretary to State Government, he should tread with caution, especially as Wike’s declaration as governor might be upturned by the Election Petition Tribunal.

“With the evidences adduced by all these great Rivers State leaders, we are confident that bloodthirsty desperados who believe that they can seize the governorship seat by hook or crook will soon be put to shame and showed the exit door by the Tribunal”, it stated.