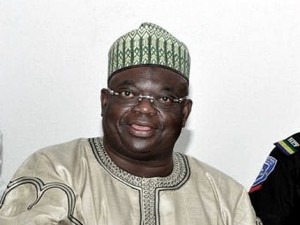 Immediate past governor of Niger State, Babangida Aliyu was yesterday booed and stoned by the people of the state at the handing over ceremony to transfer power to new governor Alhaji Abubakar Sani Bello at the Bako Kontagora Memorial Stadium.

The former governor was booed by the crowd as he walked to the podium, shouting “barawo”, “thief”.

Aliyu was not able to present his farewell speech as a result of the ensuing pandemonium. Military men from 31 Artillery Brigade were later drafted to the stadium in search of those behind the incidence.

The former governor was smuggled out of the stadium amidst tight security led by the state Commissioner of Police to avoid being mobbed by the crowd.

The new governor, Alhaji Abubakar Sani Bello and his Deputy, Alhaji Mohammed Ketso were administered the oath of office and allegiance by the Chief Judge, Justice Lami Abubakar.

Bello, in his inaugural address titled, “Repositioning the State For Peace and Development,” said though he was taking over at a critical period, all would be done to put smiles on the faces of the people of the state.

“As the administration settles down, we will examine the books and study what is being handed over to us. As a follow up to the debt burden being bequeathed to us by the outgoing administration,I will like to use this opportunity to assure Nigerlites that this administration will carry out a forensic audit to determine our debt profile and bonds with a view to determining how these funds were applied and for which projects,” he said.