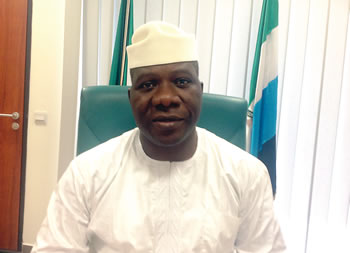 The Chairman, House Committee on Legislative Budget and Research, Mr. Opeyemi Bamidele, on Thursday defected to the All Progressives Congress on the floor of the House of Representatives.

He wrote a formal letter to the House, which was read to members by the Speaker, Mr. Aminu Tambuwal, soon after the session started.

Mr. Bamidele was elected on the platform of the now defunct Action Congress of Nigeria to represent Ado Ekiti/Irepodun-Ifelodun Federal Constituency of Ekiti State, but dumped the party for the Labour Party, where he clinched the ticket to contest the last governorship election in Ekiti.

He came a distant third in the election that saw Ayodele Fayose of the Peoples Democratic Party, PDP, defeat then incumbent, Dr. Kayode Fayemi of the APC.

In his letter which was read to the House, Mr. Bamidele said he was joining the APC to contribute “more meaningfully” to the governance of the country.

Part of the letter reads, “I am writing to formally inform you and the entire House that I have formally decamped to the All Progressives Congress, APC, along with many of my constituents and supporters beyond the immediate constituency I represent in the parliament.

“Kindly note for the record, Mr. Speaker, that I was elected into this parliament on the platform of Action Congress of Nigeria, ACN, which had become defunct as of the time I joined the Labour Party in November 2013. The APC was subsequently registered by the Independent National Electoral Commission.

“It is my conviction, as well as that of my constituents and political associates that joining the APC at this crucial stage of our nation’s polity will enable us contribute more meaningfully to our collective bid to entrench good governance and enhance socio-economic development, while enhancing the growth of our democracy”.