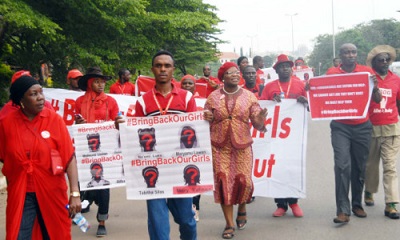 With less than four days to the end of the President Goodluck Jonathan administration, the #BringBackOurGirls advocacy group has lamented the fact that after over 400 days of the Chibok school girls abduction, their whereabout are still not known and their rescue still a mirage.

In the final press briefing on the group’s National Security Adviser (NSA) to the President, Sambo Dasuki’s count down on the statement that the abducted Chibok Girls will be rescued before May 29, 2015 the group expressed dismay that even after various promises from the government, the 219 girls were yet to be rescued.

Speaking at a press briefing on behalf of the leader of the group, Dr Oby Ezekwesili yesterday, the BBOG spokesperson, Sesugh Akume, urged the federal government to organise a final briefing session to answer the persistent questions on the whereabouts of the abducted girls.

She said: “Why does our federal government continue to fail to understand that providing a #ChibokGirls-specific briefing before May 29 is mandatory for leadership that respects democratic accountability to their citizens? We advise an immediate final briefing session to answer our persistent questions, where are our #ChibokGirls?

“As this administration concludes this week, their parents and all members of #BringBackOurGirls all over the world once again ask our government, ‘What really happened with the promise of rescue of our 219 girls?’ ‘Where really are our girls; your girls, Mr. President?’”

The group recalled that President Jonathan had on May 4, 2014 promised to use his office to do everything possible to rescue the abducted girls, adding that the promise which was more than one year old, was not fulfilled.

“Sadly only five days remain before the administration of President Jonathan ends on May 29 with still no information on where the girls are or any tangible indication of their rescue. It is a galling state of affairs that 219 young women who went to school were so tragically failed by their government and even now remain in the grips of terrorists”, she added

The group also expressed worry that even after the military operations in Sambisa Forest and the successes recorded, there was no word on the Chibok girls.

The group also flayed the insensitive silence of the federal government, which has not deemed it appropriate to provide an update on the ongoing counter-insurgency operations in Sambisa Forest, which the NSA had promised would achieve the rescue of the girls before May 29, 2015.

“Is the failure of accountability that prevailed in the execution of the counter-insurgency war not glaringly reflected in the fact that it was recently on April 14, 2015 that the last public promise to bring back our girls from Sambisa Forest was given? Over the course of our 391 days of consistent #BringBackOurGirls advocacy for the rescue of the abducted girls, we have been particularly astonished at the cynical approach to public accountability despite the huge resources deployed for the war.

“Our movement wishes that the President and his National Security Adviser will in the next few days deeply reflect on and answer the following questions on the failed effort to rescue our 219 #ChibokGirls, who have been unjustly treated as citizens of this nation”, she said.