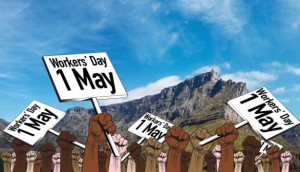 President Goodluck Jonathan has urged Nigerians to brace up for the harsh economic realities in the country due to the slump in oil prices.

Speaking on behalf of the President during yesterday’s May Day celebrations, Minister of labour, Sen. Joel Danlamilkenya pointed out that the present economic realities were so glaring that the workers cannot afford to ignore them in their engagements with the government. He therefore advised workers to be realistic with their demands.

“It is in this circumstance that the theme of this year’s Workers’ Day becomes more germane for positive engagement between government and labour. It is therefore proper to celebrate workers because of the critical role they play in the society. May Day confers us the opportunity to reflect on the inherent reality we are being confronted with due to scarce resources.

“The Nigeria Labour Congress, NLC and Trade Union Congress, TUC, have a duty to play, charting a way forward for continued development and growth of Nigeria,” he said.

President Jonathan commended both the NLC and the TUC, for their various contributions to the sustenance of the nation’s development and democracy.

“The workers, apart from their immense contributions, have in no small ways, made contributions towards the achievement of democracy through the enhancement of the processes and participation. Over these years, the workers have deepened their voice and government had attended to them. There is a new initiative being championed by the Ministry of Labour and Productivity aimed at broadening industrial and labour harmony and trade unionism. This development will no doubt engender the spirit of patriotism, national consciousness, occasioned by natural justice and reasoning.

“I have set a mechanism in place to further deepen government and labour relations. Let us use this opportunity to make a commitment for national development and rebirth. Attainment of national vision will not be possible without the commitment, work and participation of Nigerian workers. It is a joint effort. I look forward to seeing a strong and vibrant federation under the new leadership of labour. I urge them to ensure workers welfare and also, working constructively for the transformation of Nigeria,” he said.