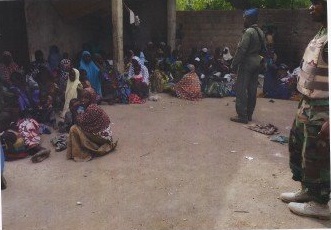 Nigeria’s Defense Headquarters on Thursday painted a sorry picture of how Boko Haram hostages were held in atrocious conditions in the group’s Sambisa Forest stronghold, after nearly 500 women, girls and children were released this week.

“Whoever they may be, the important thing is that Nigerians held captive under very severe and inhuman conditions have been freed by our gallant troops”, Director of Defence Information Chris Olukolade said.

He told reporters in Abuja the army would “comprehensively” clean out the forest, adding: “There is great hope for the recovery of more hostages of the terrorists”.

It would be recalled that some 200 girls and 93 women were freed from camps within the former colonial era game reserve on Tuesday while the army said on Thursday that about 160 more hostages had been rescued.

The rescues brightened chances of the liberation of 219 girls kidnapped from their school in Chibok, Borno State on April 14 last year, which caused global outrage.

To strengthen the Nigerian military’s position on the living conditions of the hostages, Olukolade, a Major General of the Nigerian Army, displayed a series of photographs purporting to show some of the rescued women and children in an undisclosed location, huddled on the ground watched over by soldiers.

One very young child pictured appeared to be in a state of malnutrition as army medical personnel could be seen attending to others.

Olukolade said air force jets had been bombarding the forest, which he described as Boko Haram’s “last bastion” in the northeast after being pushed out of captured towns.

Olukolade used the occasion to reiterate the call on Boko Haram fighters to surrender as the forest would no longer be a safe haven for them.

“The essence of this operation is not for us to kill anybody”, he said. “We encourage any of the combatants, who is desirous to surrender, should come out [because] the forest will no longer be conducive for their activities”.