Home Metro News Buhari Will Be Wise Not To Waste Time And Resources On Probes...
Facebook
Twitter
WhatsApp 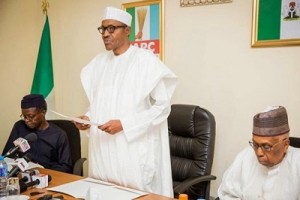 Group Managing Director and Chief Executive Officer, Global Biofuels Limited, Dr. Babatunde Obada has advised president-elect Muhammadu Buhari against wasting time on probing people suspected of being involved in corrupt practices in the oil and gas sector as it will slow than the much needed revamping of the sector.

Obada said the recently published audit of the accounts of the Nigeria National Petroleum Corporation (NNPC) was a good start, but beyond that Buhari should just focus on improving the sector.

“…it is really not advisable for the new President to waste too much time and resources on probes. He cannot afford that kind of luxury, even if it will titillate some Nigerians,” Obada told Vanguard in an interview.

“He should instead, focus on moving the system and the economy forward. The new team should look at the inherent structures. For instance, whether it is proper for NNPC to retain some of their earnings and use it to run their operations without going through appropriation. The new government may decide that every kobo made from the sales of crude oil must go straight into the federation’s account and NNPC may not be allowed to retain any part of the money. As simple as it sounds, even that cannot be done by executive fiat. It must go through legislation and the amendment of the NNPC Act.

“… the incoming President worked in NNPC before and he had a reputation for firmness. Without as much as pronouncing a word, I am sure that everyone will sit up. He can bestride on the novelty of that popularity and move quickly to put things in order and restructure the downstream sector.

“This is imperative because if within 100 days he does not make any positive impacts, Nigerians will start to grumble. Instead of focusing on probes that will arouse much litigation, he should assemble a group of technocrats to sit and deliberate on the challenges facing the economy and how to tackle them proactively. We heard from the social media that he is bringing back the likes of Tam David West and such other competent professionals. It is a welcome development,” Obada said.

Obada also defended the NNPC as he noted that the weight of expectation on the corporation was much.

“It is really unfortunate that NNPC is passing through this rough patch. It is a Corporation we felt so proud to belong. It is the cash cow of the entire nation of 170 million people. It is susceptible to attacks from everybody, militants, petty thieves, miscreants, organised robbery, mobbing crowds, name it. Their pipelines are routinely vandalised. Their operations are deliberately sabotaged. Through all of these, they are expected to be up and running 24/7 and 365 days. You can see how easy it is for them to get into trouble with virtually every Nigerian.”