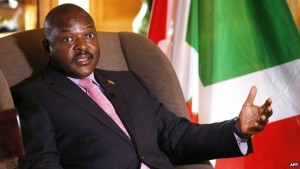 Burundi’s President, Pierre Nkurunziza can run for a third term, according to the country’s constitutional court. Under the constitution, presidents can only be elected to two terms in office but it was argued that his first term does not count as he was appointed by parliament. Read more from the BBC:

The announcement has led to renewed protests in the capital. The constitutional court’s vice-president had earlier reportedly fled the country citing “death threats”. At least 12 people have died in what is seen as the most serious unrest since the end of a civil war in 2005.

Constitutional court vice-president Sylvere Nimpagaritse said most of his colleagues thought the third-term bid was unconstitutional, but they were under pressure to change their minds, reports AFP.

The president’s spokesman Gervais Abayeho told the BBC’s Focus on Africa radio programme that there were no threats or pressure put on the judges. He said their discussions were private so there was no way that individuals could be singled out for their views. After the ruling was announced, more than 500 protesters went on to the streets of Musaga, a southern suburb of the capital, Bujumbura, reports the BBC’s Maud Jullien.