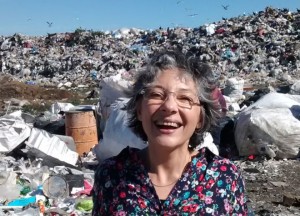 Bernarda Gallardo is perhaps the only person in the world to adopt dead babies. She does it because it is the only way to give them a proper burial. OddityCentral reports:

12 years ago, the Chilean woman read a story in the local newspaper about a dead baby found in a massive trash heap. “They killed and dumped a newborn baby on the rubbish heap,” the article read. Bernarda, who was in the process of adopting a child at the time, was horrified by the report. She realised if the baby had lived it might have come to her for adoption. So she decided to do something about it.

In Chile, the law states that if a body isn’t claimed by a family member, it is classified as human waste and disposed of along with other surgical waste. Bernarda believed every child deserves a proper goodbye so she wasn’t going to the abandoned baby be treated like garbage.

She began the long and arduous bureaucratic process of adopting the baby. She had doctors examine the baby’s body to determine that the child was indeed alive for a brief while, and not born dead. Once that was established, she had to formally adopt the baby girl – who she named Aurora – which was not an easy process. The judge in charge of the case was skeptical – he thought that Bernarda might be her biological mother, and only wanted the baby because she was feeling guilty of dumping her. Luckily, Bernarda was finally given permission to take Aurora’s body for burial. Since then she has gone through the same ordeal for three other abandoned babies.