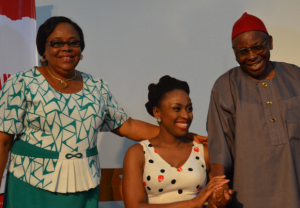 The Award winning writer from Nigeria, Chimamanda Ngozi Adichie has blamed herself for the kidnap of her father, earlier in May 2015.

In a penned piece by the Half Of A Yellow Sun writer which was published in the New York Times, Adichie slightly wrote about her self guilt when her dad, James Nwoye Adichie told her of how the kidnappers instructed him to tell his famous daughter to pay his ransom.

‘With my father’s release, we all cried, as though it was over. But one thing had ended and another begun. I constantly straddled panic; I was sleepless, unfocused, jumpy, fearful that something else had gone wrong.

‘ And there was my own sad guilt: He was targeted because of me. “Ask your daughter the writer to bring the money,” the kidnappers told him, because to appear in newspapers in Nigeria, to be known, is to be assumed wealthy.

‘The image of my father shut away in the rough darkness of a car boot haunted me. Who had done this? I needed to know,’ she wrote.

However, the writer didn’t leave the Nigerian securities agencies out as she blamed the authorities for the negligence role played after her dad’s kidnap was officially reported.

‘But ours was a dance of disappointment with the authorities. We had reported the kidnapping immediately, and the first shock soon followed: State security officials asked us to pay for anti-kidnap tracking equipment, a large amount, enough to rent a two-bedroom flat in Lagos for a year. This, despite my being privileged enough to get personal reassurances from officials at the highest levels.

‘How, I wondered, did other families in similar situations cope? Federal authorities told us they needed authorization from the capital, Abuja, which was our responsibility to get. We made endless phone calls, helpless and frustrated. It was as though with my father’s ransomed release, the crime itself had disappeared. To encounter that underbelly, to discover the hollowness beneath government proclamations of security, was jarring,’ she wrote.

Though Adichie’s parents have been ferried to the United States of America following the incident, the writer says the memories would not be leaving her father in a hurry.