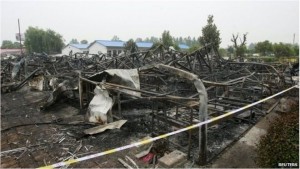 A fire at a care home for elderly people in China’s Henan province has killed 38 people, state media report. Another six people were injured in the fire, which broke out at the privately run Kangleyuan home in Pingdingshan city on Monday night. BBC reports:

Two of the injured were in serious condition, said the Xinhua news agency. President Xi Jinping ordered “all-out efforts” to care for the injured and bereaved relatives and to find out what had gone wrong, Xinhua reported.

Fifty-one people were reported to be living at the home. One survivor, 82-year-old Zhao Yulan, said only two of the 11 people she shared a room with had escaped.

A search and rescue operation was still under way on Tuesday morning at the apartment building which housed the rest home. The cause of the fire was not immediately known. In 2013, a fire at a home for the elderly in Heilongjiang province left 11 people dead. It was determined to have been started by one of the residents, who was among the dead.