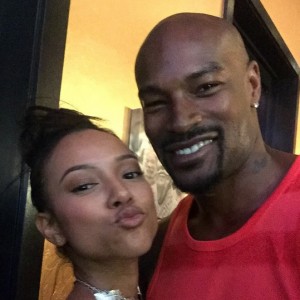 Chris Brown seems to have developed a habit of losing his women to other men.

The superstar R&b star felt jealous about Karrueche hanging out with Tyson Beckford and took to social media to let his feelings (and threats) be known.

How its all started…

Beckford and Karrueche shared a photo(above) together while they were both down at the Palms Casino Resort partying in Las Vegas.

Apparently, the picture rubbed Brown the wrong way and one of his friends, Kid Red, posted on Instagram a very threatening message directed towards Beckford.

“MEMORIAL DAY WEEKEND aka the ni**as will be out .. We just came to party tho, unless a ni**a wanna try us,” he wrote in the now deleted post.

Brown also chimed in with “U know how we get down!” but that tweet was deleted too.

Then in a more violent tweet (now deleted as well), he took subliminal shots at Beckford.

Then a few hours later, in an apparent response, Tyson, 44, shared a video on his Instagram account of himself shooting an AR15 (a high powered assault rifle) with the caption, ‘Just in case you forgot!’

Then, as if goading Chris, wrote on twitter: ‘@officialchrisbrown it’s all about fun in vegas. Come thru papa.’

Not done there he then took to Facebook, posting a video denying he was afraid.