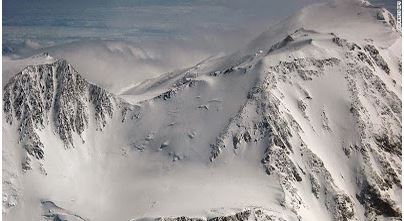 The body of a 39-year-old solo climber was discovered at the 17,200-foot high camp of Mount McKinley in Alaska’s Denali National Park. Geraldo Javier Callupan of General Roca, Argentina, appears to have died of unknown medical issues, according to the National Park Service, which reported his death Thursday.

He was found lying in the snow in the middle of the camp plateau with no visible signs of trauma.

A two-person climbing team found Callupan’s body shortly before midnight. His gear was found nearby, but he had not set up his tent, said NPS spokeswoman Maureen Gualtieri.
His is the first fatality this year on the 20,320 foot mountain, the highest peak in North America, Gualtieri said. Although its official federal name is Mount McKinley, the mountain is more commonly known to Alaskans and climbers by its indigenous name, Denali.
Callupan began his ascent of the West Buttress route on May 1 and headed up to the 17,200 foot camp on May 6, according to other climbing parties at the mountain’s 14,200 foot camp. According to NPS records, no one else was camped at the 17,200 foot plateau between May 6 and Sunday, when his body was found.
It took several days for park officials to verify Callupan’s identity. NPS staff worked with the Argentine Consulate to notify Callupan’s next of kin