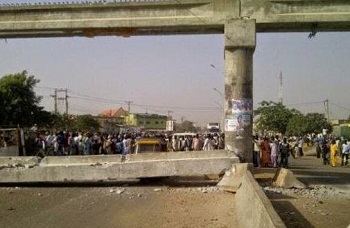 The committee set up by the Kano State Government to establish the remote and immediate cause of the recently collapsed pedestrian bridge in the metropolis, has indicted the project contractor for negligence.

You may recall that one of the beams of the pedestrian bridge, which was still under construction had collapsed and fallen on a taxi cab killing seven people on the spot.

Presenting its report to the state government on Thursday, Chairman of the committee, Usman Sadiq, attributed the collapse of the pedestrian bridge to what he described as professional negligence.

According to him, the contractor should be held responsible for the collapse of the bridge and should therefore be mandated to pay compensation to the respective families, who lost their loved ones to the disaster.

In response, the Kano State Governor, Engr. Rabiu Kwankwaso, pledged comprehensive implementation of the recommendations of the committee.

Represented on the occasion by the Commissioner for Works, Housing and Transport, Alhaji Abba Yusuf, the governor made the pledge, while receiving the report of the committee members.

Kwankwaso stressed that the implementation of recommendation of the report was necessary so as to avoid a future recurrence.