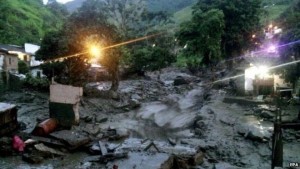 At least 39 people have been killed in a landslide in Antioquia province in north-west Colombia, officials say. Bodies are still being recovered and the authorities expect the number of fatalities to rise. Heavy rains caused the river Liboriana, in the town of Salgar, to burst its banks, triggering the landslide. BBC has more:

Much of the village of Santa Margarita, south-west of the provincial capital Medellin, was reportedly swept away when the landslide hit early on Monday. Antioquia Governor Sergio Fajardo tweeted that it was a “tragedy” and “that all emergency teams have been scrambled”.

Local official Zulma Osorio spoke of a “tragedy of enormous proportions” and asked for firefighters and first response teams to be sent from surrounding areas. She said the search was under way for missing residents, and that local officials were compiling a list of all the families which had been affected.

President Juan Manuel Santos and Mr Fajardo are travelling to the town of Salgar to assess the damage. The Colombian Air Force and police have sent helicopters to the area with rescue experts and sniffer dogs.