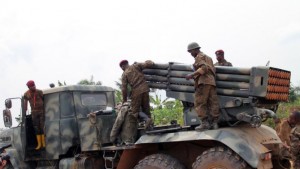 The army of the Democratic Republic of Congo killed 16 Ugandan Islamist rebels over the weekend in fierce fighting, a military spokesman said on Tuesday, part of a campaign to drive the militants from the country’s volatile eastern region. Reuters report:

Congolese forces launched Operation Sukola I early last year against the Allied Democratic Forces (ADF), who are accused of massacring some 300 villagers near the town of Beni in North Kivu province between October and December.

Four Congolese government soldiers were also killed in Sunday’s fighting, which took place in Kokola, about 40 km (25 miles) north of Beni, according to Major Victor Masandi, an army spokesman for the operation. “The toll from the battle is 16 ADF killed, six AK-47s recovered,” he said.

The ADF was formed in the 1990s to fight the Ugandan government but it has transformed into a secretive Islamist group that now operates on the Congolese side of the border, where it is active in the illicit trade in timber and gold.

Overnight attacks on civilians blamed on the rebels have declined since the army stepped up operations against the group late last year, though dozens of civilians have still died this year in similar massacres.