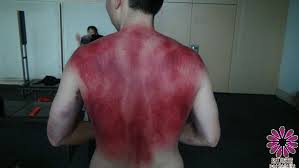 A Chinese man is gaining notoriety for trying to cure his patients’ illnesses by literally beating it out of them. Former investment banker and self-styled healer, Hongchi Xiao apparently believes that by slapping themselves black and blue, they are getting rid of toxins. Read more from OddityCentral:

Hongchi, who claims to have learned the ancient practice of ‘paida lajin’ from a Taoist monk, says that his slaps have cured several medical conditions ranging from diabetes to hypertension. “The slapping andstretching work together to clear the meridians of blocks and help the body get rid of the disease,” he explained.

Hongchi claims he can diagnose patients simply by stretching their legs and has no faith in modern medicine, calling it “concentrated pollution” and “poison”. Although he teaches his followers the art of slapping, he encourages them to do the actual slapping themselves until they get the desired results. “It is tough. It’s not for everyone,” one practitioner said. “It basically starts the circulation. If you already have some medical issue or condition, you should take it to a doctor and get professional advice. I would say it’s more like a yoga teacher who shows you the positions, and you go home and do it at home.”