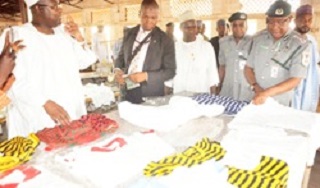 Comptroller-General of the Nigerian Customs Service, Abdullahi Dikko Inde, yesterday said textile materials worth about N315 billion smuggled into the country were recently impounded in Kano State by his men.

The confiscation was sequel to a May 8 raid carried out by the NCS on warehouses suspected to be used by smugglers to store some textile materials.

Speaking in Kano during an inspection of the seized goods, the Customs boss said 75 warehouses containing contraband textile materials owned by smugglers were sealed up and each of the warehouses is worth N4.2bn.

“I initiated the raid of the warehouses from my office in Abuja based on information in order to salvage our economy. Only one of the warehouses worth is N4.2bn and if you multiply it by 75, you will get the worth of the seizure we have made”, he said.

Mr. Inde pointed out that the confiscated goods would be thoroughly screened to determine contraband items adding that owners of genuine goods would be made to pay appropriate taxes.

“If you recall during the Obasanjo administration, over 200 trailers of contrabands were burnt here in Kano and over 400 others were burnt in Lagos. So I will report the situation to the federal government for them to take a decision on it”, he said.

Inde added that the seized materials would be distributed to internally displaced persons in the North East.

“We are doing our best and they are doing their worst. Even if all the 170 million Nigerians are deployed to our borders, they cannot stop smuggling”, he added.

He said he would soon establish the Customs, Traders and Manufacturers Consultative Forum to bridge the gap between the stakeholders.