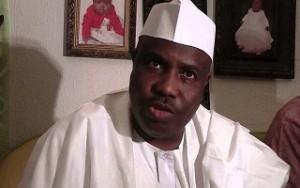 Three cyclists, Monday arrived Sokoto from Bauchi state after riding their bicycles for 870 kilometres to congratulate the Governor-elect and the Speaker of House of Representatives, Alhaji Aminu Tambuwal, on his victory in the April 11 governorship elections in the state.

The cyclists – Mohammed Samaila, Nuhu Ibrahim and Nasiru Ya’u arrived Sokoto around 11.00 am on Monday.

Speaking shortly after they arrived at the residence of Tambuwal at Gawon Nama area of Sokoto metropolis, the leader of the team, Mohammed Samaila, told journalists that they spent nine days on the road.

“We decided to ride our bicycles to Sokoto to honour Tambuwal because of his steadfastness and commitment towards bringing an end to the visionless and incompetent Peoples Democratic Party-led administration in the country.

“In fact, we faced many challenges while on the road and were forced on two occasions, to repair our bicycles when they developed problem,” he said.

According to Samaila, the cyclist brought messages for Tambuwal from the people they met in some villages. The villagers asked Tambuwal to join hands with President-elect Muhammadu Buhari to tackle unemployment, poverty and corruption in the country.

Responding on behalf of Tambuwal, his Personal Assistant Malam Musa Girkau, assured the cyclists that Tambuwal was determined to partner with Buhari to bring the desired change in the state and country.

“I want to assure you that this change is real and that Tambuwal is committed to improving the the welfare of the common man,” Girkau said.