Home Entertainment Dangote Cannot Afford To Buy Arsenal Football Club – Etcetera Writes..
Facebook
Twitter
WhatsApp
You have sold some shares and you’ve got some money to spend. Now you want the ultimate: Your own football club. Hold on there, are you sure? Football clubs are a nightmare to run. In fact, almost two-thirds of premiership clubs have been in receivership at some point. Remember Portsmouth FC ploughed through four owners some seasons back and landed itself a debt of £60m and relegation in the Championship. 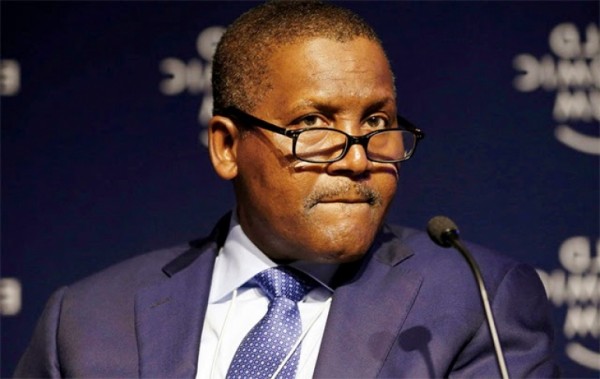 Think of Leeds United’s tragicomic collapse; the balls-up at Cambridge United; Rotherham going into receivership in 2006 and 2008; Southampton’s sorry saga. And, of course, Crawley Town getting a winding up order years back. So, what do we know? Don’t buy a football club for the glory. So, before Dangote aspires to join Abrahamovic, Glazers and Al Mansours, he should make sure he knows his stuff.
But does Dangote know how much these football clubs really cost?

No, he can’t. New UEFA Club Licensing and Financial Fair Play Regulations already in place, require clubs to balance their income and expenses. Dangote cannot operate under such rules. The premiership is too organised and transparent for any businessman to easily manipulate. The wagestructure of footballers is too large for a businessman like Dangote to take on. Let us forget that those goons at Forbes have told us that Dangote is Africa’s richest man. As it stands, he cannot afford the outright purchase of a big football club like Arsenal. It is as simple as that. He will go broke. It is a possibility if we are talking about a club in the coast of West Africa. Dangote has most of his wealth in shares and physical assets and the football business requires liquid cash to sustain. Have we all forgotten that the same Dangote got a 3G licence and sold it to Etisalat? He is a very smart businessman who knows how to pick his areas of investments.

Can he get Bank backing?
Unlikely! No serious private equity firm would get involved with a football club. They are not proper businesses. Too much politics, too many egos. And there’s no proper exit route – the history of football clubs on the stock market is chequered, to say the least. They are rich men’s toys, great for entertaining your mates, and that’s about it. I don’t think Dangote can afford such an expensive toy.

A lot of people think it is relatively easy to make a million pounds by being the owner of a football club. That all you have to do is put in that first two million pounds. But these people should also know that since the English Premier League was formed in 1992, football finances have dried up to the extent that making a million pound profit is no longer a walk in the park. It is also the case that buying a football club is unlikely to yield that much of a return. Despite the significant TV and othercommercial revenues, football clubs in England’s top flight still struggle to break even. This is ironic, given the goal of setting up the Premier League was to stabilise club finances.

Is Dangote putting his heart over his head?

Yes I think so. Simon Jordan, in his autobiography, tells the story of how owning a football club can go terribly wrong. Jordan amassed a fortune of £75m in the early days of the mobile phone revolution. In 2000, he paid £10m to take control of South London football team Crystal Palace, becoming the youngest football club chairman at the age of 32. He was warned by many not to do it, but having watched the club since his childhood, he could not resist. Fast-forward 10 years and the club was in administration and Jordan’s personal wealth largely wiped out. It is reported that Roman Abramovich, the Russian owner of Chelsea, has written off more than one billion pounds he ploughed into the club since acquiring it in 2003.

Catching him up fast is Sheikh Mansour from Abu Dhabi, who has invested close to one billion pounds in Manchester City since 2008. Can Dangote write off such a huge amount of money? It is in fact the amount of money he borrows to invest in businesses. But again, I think Dangote is just trying to hype himself. Most of the serious money flowing into football recently has come from the Middle East. The Qatar Investment Authority (the country’s sovereign wealth fund) bought the French Ligue 1 side Paris St Germain in 2011 and has gone about transforming them in the same way Sheikh Mansour has Manchester City. Forget those guys at Forbes, Dangote is not in the same league as these guys.

The Glazer Family bought Manchester United in 2006, recognising the immense value of its global brand as a cash generatorand the opportunities to enhance it even further. The cost of buying the club was loaded on to the club itself, with the revenues it generates used to pay the debt and interest that the Glazers undertook to buy the club. Eventually, the hope is that the club will essentially pay for itself leaving its American owners in possession of a multi-billion pound asset but till date, the Glazers are still gnashing their teeth and are still neck deep in debt. When it was speculated that a Middle East consortium was willing to pay £1.5bn for Arsenal Football Club, it was stated that Stan Kroenke, the American who owns about 63 per cent of the shares in the club, would have made just £400m on his shares. So, given the appalling financial returns, why do people buy football clubs?

It is often mistaken that these clubs go for a quid. For instance, Swansea City was bought by investors for £100, and sold four years later for a £1. But beware: underneath those figures lies a pile of debt.

Does Dangote have the cash, can he do an Abramovich?